After extensive community consultation, I am happy to introduce the neighbourhood platform! Designs to tackle hyper local issues so you can see what my priorities will be for the area if elected. 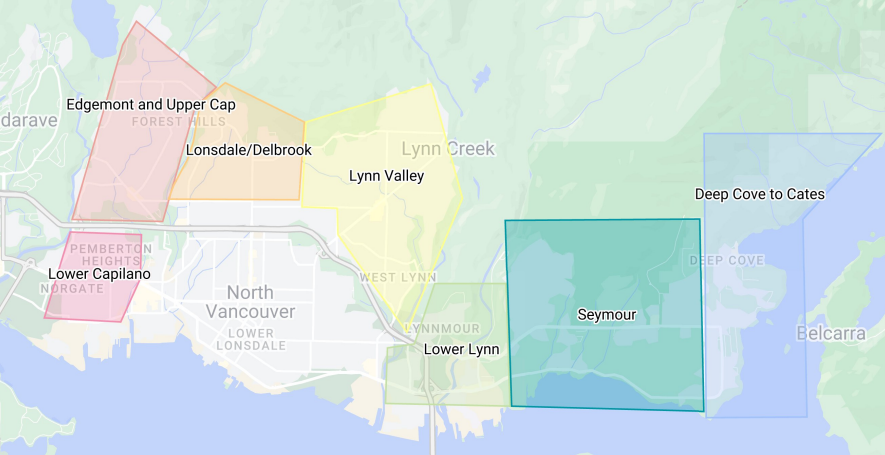 This neighbourhood has incredible access to outdoor recreation option, but with very few options to access them. The focus here will be on expanding public transit options as well as some small scale development around Edgemont Village
‍
- Supporting Translink's plan to get a bus between Lynn Valley and Edgemont and to Park Royal
- Advocate for more bus service in the area, especially at off-peak hours
- Use and expand the local pathways for better active transit options
- Support small scale developments in Edgemont Village - ideally 2-6 stories with mixed residential and commercial use

This is a central area for improving east-west transit on the North Shore that is seriously underserved. This is also a neighbourhood that would benefit greatly from small scale densification
‍
- support work required for more east-west public transit along Queens/29th Street, as well as the upper levels Montroyal route
- explore the benefits and potential spaces for an upper Lonsdale transit exchange
- allow for lowrise, small scale development along transit corridors after the transit has been created
- connect the active transportation routes along this corridor
- create more traffic calming measures around Delbrook Rec Centre
Lynn Valley does have some significant development fatigue, but still has some key areas that need to be considered, within the limits of the OCP. Public transit is good, but could be better.
- allow for townhouse development and lowrises along Lynn Valley Road and Mountain Hwy, within the parametres of the OCP and with 400metres of the town centre
- fix the 29th Street bike lane, moving the lanes to one side of the street as a continuation of the CNV portion
- Improve transit options to Lynn Canyon and Lynn Headwaters
- Expand the Lynn Valley Loop and local trails to have wider spaces for more mixed use active transport
- Long term looking at more options for transit and active transportation options between Lynn Valley and Lower Lynn neighbourhoods
Seylynn has been done well, but a focus needs to be directed towards building a community recreation centre here. Transit in and out of the Lynnmour area needs to be greatly improved, as does increased targeted densification.
‍
- advocate and support more public transit to and from Lynnmour and Capilano University
- create a new state-of-the-art recreation centre in Seylynn and explore replacements for Ron Andrews Rec Centre
- support more student housing in and around Capilano University
- Despite the likely addition to reserve at Maplewood, try to work with the Tsleil-Waututh Nation and developers to build an inclusive and proactive Maplewood Innovation District
- begin expansion of the Spirit Trail and improve options to get around Phibbs Exchange by active transportation
- explore a summer use shuttle up Lilliooet Road for trail access in the peak months
‍
The Seymour area has been severely neglected when it comes to infrastructure and that is where the majority of the focus of the next council needs to be.
- Improve transit options in and out of Seymour, especially to connect to other North Shore destinations without a transfer at Phibbs
- Plan and begin a full Dollarton revitalization plan with the Tsleil-Waututh Nation that includes massive expansions to active transport along the waterfront to Cates Park, as well as habitat restoration
- build a connected paved trail for all season active transportation usage between Blueridge and Parkgate Centre
- develop a healthcare hub at Parkgate Centre
- explore the option for a summer shuttle from Phibbs up to Seymour, in partnership with Translink ideally
- expand the trail networks around the Seymour area, to provide more options for trail users, partner with NSMBA to accomplish some more options for mountain bikers
This neighbourhood arguably has the greatest potential for creating a thriving local economy without detriment to the neighbours, especially as the area is over capacity already.
‍
- explore and implement a summer foot-ferry service between Port Moody, Deep Cove, and Cate Park. Explore connecting this with the seabus network
- return land up Say-Nuth-Khaw-Yum to the Tsleil-Waututh Nation to expand and develop the parkland there
- in conjunction with returning land up this area, look at buying back some empty lots in Woodlands to turn to parkland and save residents having to pay Speculation Tax
- improve and expand active transportation options in the entire area, especially separated bike lanes
- explore the creation of an all-season paved pathway between Parkgate and Deep Cove for active transportation
- minimal development here over the next four years, with a focus on infrastructure building
Copyright © 2022 Ellison Mallin
Authorized by Ellison Mallin, Financial Agent and Candidate, 778-956-7487